It seems to me that you sheep are really suckers for a show, the latest show being that “ribbonesque” salute to the armed forces and veterans of the military. Camo ribbons are the in this week, maybe yellow next, but decidedly no red for all the blood being shed in every act of war. I wish, with this post, to make my position on the military and veterans clear, in so doing perhaps speaking for a few of you kind lambs, whether or not you are of the kind that cheers on your side at any cost.

People like me, and if a sheep by association, still not of the flock, are just this side of being pacifists. Clearly I am not a total pacifist, as I actually enjoy conflict and opposition at least in argument and debate, and I can even understand a good fair fight for something on the line, when it comes right down to it. An old style duel is perfectly OK to me. Where I draw the line, and so for all practical purposes become a military pacifist, is at every fight that is unfair, sneaky and undeclared, or whenever someone is told to fight someone they do not know, for reasons unknown, by someone else, or what I call forced combat.

What I wish to say is that, if you or a loved one are a veteran, you really need to ask who genuinely cares about your or your loved one’s life. Myself, I will always object to any undeclared war or sending of troops on military missions when the nation is not immediately under threat. This includes Iraq, Iran, Afghanistan, Korea, Vietnam, and every other skirmish when American troops were sent in before America ever received one shell of enemy fire.  I will for this essay not discuss the questions about the big wars. Regardless, the question to ask, rephrased, is “Who is attacking us?” More specifically, who is putting us in so much danger that we are willing to send our youngest and strongest men off to die in order to ward off the threat?

True, I can foresee your first objection, the old preemptive strike argument. So if you come running up at me in anger I don’t have to wait for you to hit me in order to hit you over the head (with something heavy, usually) first. It is a good argument, when applied to a personal situation. However, when the “adversary” is a target pointed out to you by someone else that 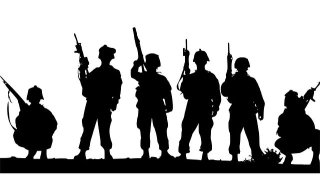 is a different story, and now the personal analogy becomes the same as that situation of a hired killer. They don’t care what the reason is, you pay them to do it, so they will.

Life is too precious to be wasted on wars for corporate enterprising and bank realignments. It is too valuable, especially at so young an age, to be thrown away on ideals and rhetoric and beliefs, when all that really matters in life is what a person does. It only makes sense that in the end, that is how we will be judged, if judged we be. Sheep, they believe sometimes just to believe, and think that makes them who they are, as if the wolf in sheep’s clothing might be called thenceforth a sheep. You can believe yourself a Christian, but if you support war for anything other than defense (and even that is debatable) you are not a Christian. You can believe yourself pious and a church-goer, but that means nothing if you begin your cursing at your fellow-man before you even make it out of the parking lot. You are what you do whether you like it or not. Belief without coinciding action is nothing but personal fantasy. You can call it posing, pretending, and sincerely childish.

But as that great philosopher Andre Agassi once got paid to say, image is everything in the sheep world, the sales of Mary Kay, hair implants, and plastic surgery enough to apparently justify old Andre’s line. Sheep say they care about the troops, some even cry for them, some the very same who will be shouting “blow their heads off” at every news broadcast. The government says they care about the troops, and honor them, but then send them into places for operations often so covert the soldiers don’t even know their objective and, technically, who they are shooting at. Is this concern? Let’s outline in detail what this enemy has done to us, that we should be destroying his and our own people, their structures, the hopes of the next generation, the bankbooks of our countries…ruining of families, wasting of resources for no return, and so on. Yes, yes I say we should do it, and sometimes it is necessary. But first we have to have a reason. A band of renegades from another country that come here and bomb a big building also to me is not reason to attack that band’s country. If a Finn kills a Norwegian, should Norway declare war on Finland? The idea is preposterous and not good enough for me to part with all those things, and take all those risks. Life is too precious.

Simply stated, if you care about the troops, you should first make sure they are not wasted. How to tell, with all the politics involved, you ask? Here is the test. First, make sure you are being attacked, and who exactly the attacker is. Second, are you willing to head down with your own musket you feel so threatened? If so, this is a just cause, as you are under immediate threat by a known and declared sovereign enemy. You feel the need to protect your own and those around you. Rather than just support the military, you are prepared to become it.

Anything less is really “just uncivilized,” shows lack of understanding as to what “defense” means, but worst of all, demeans the value of human life.

Now as to the veterans of past wars, we have no sane option other than to admire their service. Lives were sacrificed in the defense of human liberty and this is a fact. Heroes exist among us for feats of bravery, recognized and not, that most sheep could not even comprehend. Regardless of what history will have to say, as it is being rewritten now as we speak, the rightness or wrongness of past military action those soldiers had to perform must always be respected. I am against those low-lifes who can find no better venue, for example, than Veteran Cemetaries to shout their baby-killer accusations. It is just disrespectful. Veteran appreciation is a good thing. It should teach us the costs of war, but for ages now the lessons have been coming…but the real knowledge to be gained never seems to sink in. What has changed? Is the world better off?

Blind patriotism is a marketing device, and war is the biggest public and privately-contracted government program of all. Unless you are willing to ask for reasons for war and an identifiable threat, unless you are under attack, unless you are ready to grab your pea-shooter and start sniping too, never ever give your children in support of any war.

I won’t give mine…you’re gonna get me first.

Who in the end is responsible?